Twenty-five years after the verdict in the Rodney King trial sparked several days of protests, violence and looting in Los Angeles, LA 92 immerses viewers in that tumultuous period through stunning and rarely seen archival footage.

I was also just 11 years old, growing up in a peaceful small dutch town in the south of holland, and at the time had no idea what was happening  to Los Angeles in 1992. Looking back, the LA Riots truly influenced America: Musically, culturally, cinematic, style, anti government sentiment in the years to follow, and eventually america’s acceptance or rejection of diversity, more than any other event in the 1990’s I feel, including the O. J. Simpson murder case. 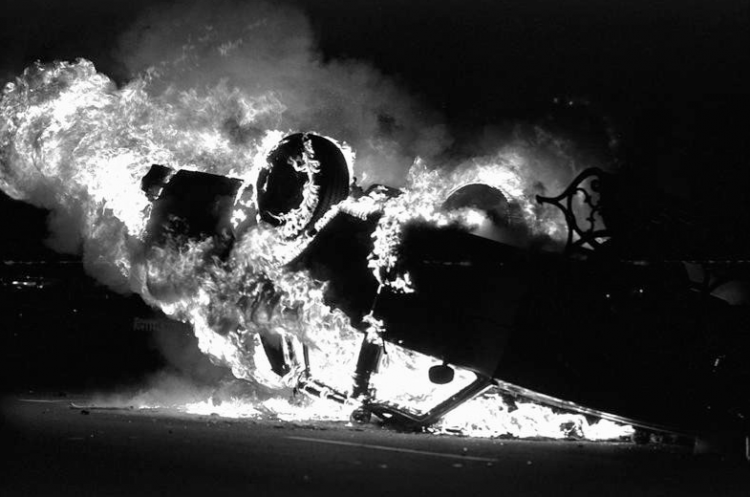 Even having lived in LA for a five years (decade later), I started to understand it slowly through my friends while living there. Through this film I felt I was there, and the impact of the riots really got to me. The archive footage, chronologically shown in the film is absolutely eye-opening. Thanks in part to excellent editing and a subtly gripping score by Danny Bensi & Saunder Jurriaans.

I never really experienced racism until I moved to Los Angeles in my 20’s and there really was a feeling that I could only experience the friction that causes earthquakes (coincidentally) within the culture of that city; it’s a bloody mess of ambition, failure, inequality, and segregation (racial & financial).

The film sets up the social climate with the Watts riots and all but suggests that we’re due for another social catastrophe (Watch/Read more about Director Craig Atkinson’s ‘Do Not Resist’ – documentary that explores the militarization of local US police departments) and, by all accounts, I can’t say that I disagree.  (source basil1984)

Catch up with one of the year’s most vital documentary achievements. The winner of the 2017 Emmy Awards for Exceptional Merit in Documentary Filmmaking…

Twenty-five years after the verdict in the Rodney King trial sparked several days of protests, violence and looting in Los Angeles, National Geographic’s new feature documentary LA 92 immerses viewers in that tumultuous period through stunning and rarely seen archival footage. Produced by two-time Oscar winner Simon Chinn (“Man on Wire”) and Emmy winner Jonathan Chinn (“American High”) and directed by Oscar winners Dan Lindsay and TJ Martin (“Undefeated”), the film looks at the events of 1992 from a multitude of vantage points, bringing a fresh perspective to a pivotal moment that reverberates to this day.

Gives a full sense of the anarchy and rage of the post-King verdict days, thrusting us fully and disturbingly into events in very much of a You Are There manner – Kenneth Turan| Los Angeles Times.

More
1.) Trio of L.A. riot documentaries look back to 1992 – by Robert Lloyd and Lorraine Ali
2.) Rodney King riots 25 years later: a view from the corner where it all began by Rory Carroll
3.) O.J.: Made in America – ESPN.com