On Her Shoulders: a Yazidi’s fight for justice

December 10, 2018, Nadia Murad receives the Nobel Peace Prize in Sweden. Nadia was captured by ISIS as a young jezidi and in 2014 survived genocide and sexual slavery.

Nadia Murad: Nobel Peace Prize lecture 2018 (English subtitles).
The gynaecologist Denis Mukwege is the other winner of the prize, for his work helping the victims of sexual violence in the Democratic Republic of the Congo.

At the UN she recounts the harrowing experience of being abducted with other Yazidi women by Islamic State militants in northern Iraq in August 2014.

With deep compassion and a formal precision and elegance that matches Nadia’s calm and steely demeanor, filmmaker Alexandria Bombach (Winner Directing Award Sundance 2018) follows this strong-willed young woman, who survived the 2014 genocide of the Yazidis in Northern Iraq and escaped the hands of ISIS to become a relentless beacon of hope for her people, even when at times she longs to lay aside this monumental burden and simply have an ordinary life.

It’s a film that I recommend you all to watch. ‘On Her Shoulders’ is the story about desperation and determination. It is the story of Nadia’s quiet but persistent fight for the recognition of, and justice for, herself, her family, and the Yazidis people. And critiques the limits to western compassion. 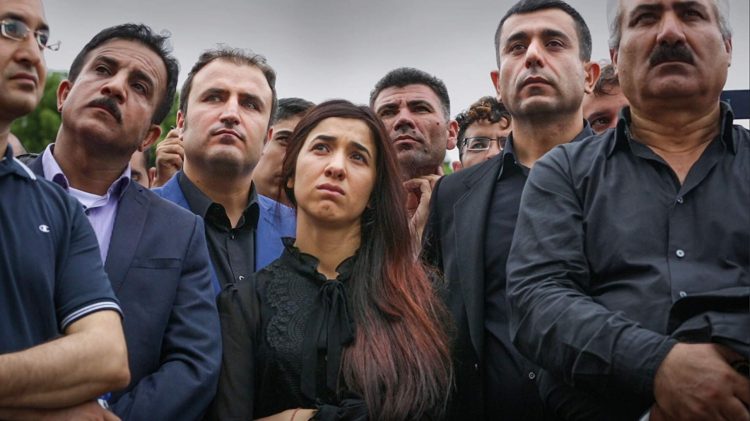 Her story is now heard all over the world. Thus she became the face of the Yezidis, a historically persecuted religious minority. The ordinary girl was suddenly pushed onto the world stage of advocacy. Despite her desire for a normal life, away from the spotlight, Nadia continues to stop the genocide and try the ISIS commanders.

We see Nadia in her daily life in this film and we follow her during the highlight of her advocacy campaign with emotional speeches and an endless succession of one-on-one meetings with top officials. Her work takes a heavy toll. Sometimes there is a glimpse of Nadia as she once was, a strong-willed girl who dreamed of opening a beauty salon in her village.

Nadia’s story comes from a very different (and more difficult) part of the world than we’re accustomed to; and initially, it can seem very detached from our everyday lives. By watching this film, it forces you to confront this uncomfortable reality, and realise that someone else’s reality is actually our collective reality.

This blog post is an invitation for you to spend 1 hour and 34 minutes to walk in her shoes, and understand their struggle. It’ll help you to be more empathetic, to see everything in a broader perspective, and perhaps even inspire you to act.

NADIA’S INITIATIVE
Nadia’s Initiative (NI) is a registered organization aimed at increasing advocacy for women and minorities and assisting to stabilize and redevelop communities in crisis. Presently, the team is embarking on efforts to establish meaningful and sustainable programming in the Sinjar region of Iraq through the Sinjar Action Fund.

Since the invasion of the so-called Islamic State (IS) in 2014, the Sinjar region has struggled to ensure the safety and livelihoods of the primarily Yazidi population now displaced throughout the country. As Iraqi coalition forces have made progress against IS insurgents, northern Sinjar has increasingly opened up for resettlement of this community.

Unfortunately, only minimal public assistance has been given for this cause. Consequently, NI seeks to establish both short and long-term programming aimed at redeveloping Sinjar, the ancient homeland of the Yazidi minority. For more info or to make a contribution, please click here or visit nadiasinitiative.org.

Nadia’s Initiative advocates for victims of sexual violence and works to rebuild communities in crisis. Help us challenge world leaders to push past the status quo and assume a responsibility to act – to make “never again” a reality, not an empty promise.

Nadia’s other great ally is Amal Clooney, who speaks passionately in the UN about bringing terrorists and criminals to justice.