How 3M and DuPont made billions by exposing the entire world to a toxic chemical which causes cancer and birth defects and is now found in the blood of 99.7% of Americans.

Stephanie Soechtig’s doc shows how 3M and DuPont have made billions by exposing us to toxic chemicals.

The latest in a long line of eco-docs that leave viewers hoping pitchforks will be distributed as they leave the theater, Stephanie Soechtig’s The Devil We Know uses just a single case study to find ample reason to want decision-makers at DuPont jailed or worse. Parkersburg, West Virginia, has been ground zero for the impact of chemicals used in the company’s Teflon and other products — chemicals now reportedly found in the blood of 99.7% of Americans. An obvious choice for HBO or a similar outlet, the doc will agitate on the fest circuit, and likely prompt more than a few viewers to toss their Teflon pans into the trash. (That mightn’t be the right response, for reasons beyond this film’s purview.)

A massive hit with consumers since the mid-’40s, Teflon manufacture in Parkersburg represents a big share of the town’s economy. (The sign in front of the public school prominently features the DuPont logo.) It also represents horrific ailments throughout the region. Women who worked around the stuff while pregnant have given birth to terribly disfigured children like Bucky Bailey, who had one nostril and other deformities that required more than 30 surgeries in his first few years of life.

A blood-boiling eco-doc whose story is far from over – John DeFore.

Those who don’t even work at the factory pay the price as well. Farmer Wilbur Tennant, whose property neighbored a stream where DuPont dumped waste, saw his entire herd of cattle slowly disfigured and killed. When children nearby started suffering similar effects, resident Joe Kiger put two and two together, tying these ailments to a letter he had received about water contamination, which reassured townsfolk that there was nothing to worry about. That letter had been meant to start a statute-of-limitations clock ticking, preventing lawsuits for damages. But Kiger foiled that plan, starting a class-action lawsuit that eventually led to a $671 million cash settlement. (The film doesn’t note that stock prices for both DuPont and its chemical-making subsidiary Chemours actually rose after this settlement, since the companies were thought by observers to be getting off cheaply.)

A group of citizens in West Virginia challenges a powerful corporation to more environmentally responsible.

Soechtig and her science-expert interviewees talk about the Teflon ingredient C8 (aka PFOA), which DuPont bought from supplier 3M. C8 has been used in everything from non-stick pans to Scotchgard, rain-proof outerwear and microwave popcorn bags. She recounts some of the controversies following the compound, which eventually led 3M to cease manufacturing it. Astoundingly, at the same time 3M realized the stuff was too toxic to make, DuPont — shown to have known about its health risks for decades, and to have deliberately hidden them — decided to start manufacturing the stuff. (Wouldn’t the EPA prevent such a thing? Not likely, given the “revolving door” Soechtig cites between the company and the federal agency. 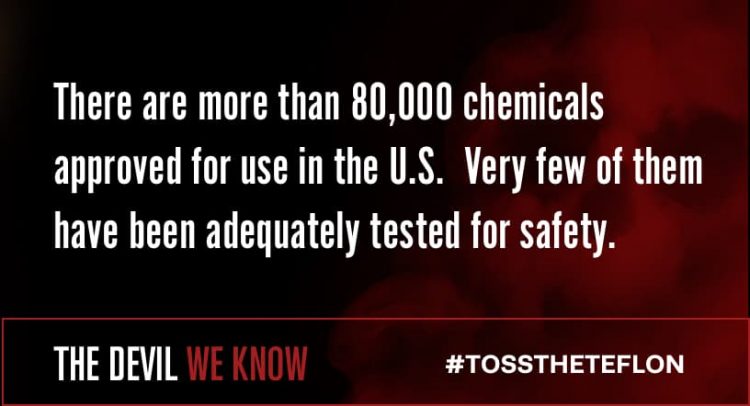 In following the personal lives of her subjects, Soechtig strays once or twice — as when she devotes lots of screen time to Bailey’s decision to have a child despite knowing there’s a 50% chance he’ll pass on his agonizing condition. While many viewers will root for him and his wife, whose happiness we’re very invested in, others will find this choice unconscionable and be distracted from the corporate evils that caused this situation

The film sees some hope in the impressive fact that the participants in that giant class-action suit agreed not to take the money themselves, but instead use it to fund the “largest human health study in history” to determine who else might be able to blame their cancers and other ailments on DuPont’s recklessness. If only we lived in a country where some punishment greater than a wrist-slap fine (compared to Teflon’s annual revenues) awaited those who make and have made DuPont’s policies.

Written by John DeFore from THR.