Who is Dick Cheney?

Cheney was the son of Richard Herbert Cheney, a soil-conservation agent, and Marjorie Lauraine Dickey Cheney. He was born in Nebraska and grew up in Casper, Wyoming. 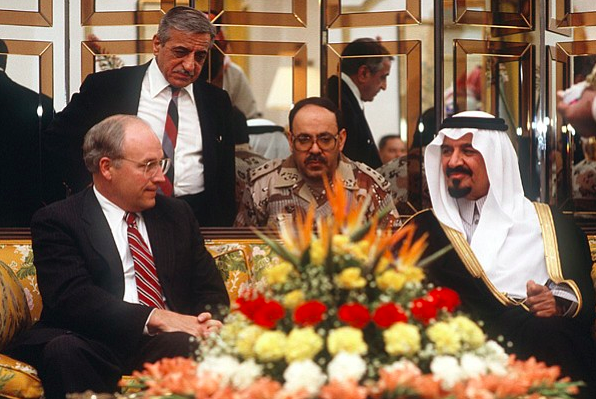 The man historians have dubbed the most powerful Vice President in the history of the United States.

From 1989 to 1993 he served as secretary of defense in the administration of Pres. George Bush, presiding over reductions in the military following the breakup of the Soviet Union. Cheney also oversaw the U.S. military invasion of Panama and the participation of U.S. forces in the Persian Gulf War. In 1995 he became the chairman and chief executive officer of the Halliburton Company, a supplier of technology and services to the oil and gas industries.

After George W. Bush’s primary victories secured his nomination for the presidency of the United States, Cheney was appointed to head Bush’s vice presidential search committee. Few expected that Cheney himself would eventually become the Republican vice presidential candidate. Two weeks after election day, Cheney suffered another mild heart attack, though he quickly resumed his duties as leader of Bush’s presidential transition team.

As vice president, Cheney was active and used his influence to help shape the administration’s energy policy and foreign policy in the Middle East. He played a central, controversial role in conveying intelligence reports that Saddam Hussein of Iraq had developed weapons of mass destruction (WMDs) in violation of resolutions passed by the United Nations—reports used by the Bush administration to initiate the Iraq War. However, Iraq had no WMDs that could be found. Following the collapse of Saddam’s regime, Cheney’s former company, Halliburton, secured lucrative reconstruction contracts from the U.S. government, raising the spectre of favouritism and possible wrongdoing—allegations that damaged Cheney’s public reputation. Critics, who had long charged Cheney with being a secretive public servant, included members of Congress who brought suit against him for not disclosing records used to form the national energy policy.

In a relative unknown 2015 released documentary “Dick Cheney – A Heart Beat Away” from Wyoming PBS, former Vice President Dick Cheney talks candidly about his youthful missteps, the Bush Administration’s internal battles, and new revelations of how close Al-Qaeda came on 9/11 to striking the Capitol or the White House.

Dick Cheney forcefully defends the Bush administration’s War on Terror, both in the Middle East and on American soil.

In “Dick Cheney: A Heartbeat Away”, Cheney forcefully defends the Bush administration’s War on Terror, both in the Middle East and on American soil. “Things change; time travels on,” he says. “It’s up to me and others who participated to explain what we did and why.”

The 90-minute documentary “Dick Cheney – A Heart Beat Away” delves deep into Cheney’s roots in Wyoming, where his father, a Democrat working for the New Deal Soil Conservation Service, moved the family from Nebraska in 1947. Cheney talks about dropping out of Yale University and his struggles with alcohol while working as a power lineman in Wyoming.

“Naturally enough, in this documentary we’ve devoted a lot of attention to his upbringing in Wyoming, but we are always thinking, as we must, of the decisions he made as Vice President – because that’s what he’ll be remembered for” – Geoff O’Gara

With the help of Lynne Vincent Cheney, whom he married in 1964, Cheney turned his life around. He was elected to Wyoming’s sole seat in the House of Representatives, rose quickly in Republican leadership ranks, and became Secretary of Defense in 1989 under President George H. W. Bush. Cheney suffered the first of four heart attacks during his first run for Congress, when he was 37-years old.

The documentary chronicles a life-long battle with heart disease, culminating in a heart transplant in 2010. Now 77, Cheney lives an active lifestyle, writing, traveling, spending time with family, and picking up a fly rod whenever possible. The former Vice-President submitted to over 15 hours of interviews with O’Gara.

“The Cheney’s didn’t just sit for interviews – they agreed to give Wyoming PBS complete editorial control, and that can’t be easy when you feel you’ve been demonized by the press.” – Geoff O’Gara.

Childhood friends and early political allies talk about the forces that shaped him. Close observers of his public life – including former Secretary of Defense Donald Rumsfeld, Wyoming Senator Alan Simpson, and author Bob Woodward – join the debate over his role in the world-shaping events of the early 21st century.

Cheney offers his own insights into the controversial policies he advocated, while wryly acknowledging that he was labeled “the vice president of torture” by opponents. “The Vice President let me know there were things he’d rather we didn’t feature in the story”, said O’Gara. “But he cooperated fully in many hours of interview, he was always cordial and often funny, and we got those family photos. And some of the things he didn’t want in the documentary are, indeed, in it.”

No End in Sight (2007) by Charles Ferguson
A comprehensive look at the Bush Administration’s conduct of the Iraq war and its occupation of the country.

The War You Don’t See (2010) by Alan Lowery and John Pilger
Thought-provoking documentary on war propaganda: how governments manipulate the facts and how most media let them get away with it.