Cao Shu is a Filmmaker (new media artist) and educator who lives and works in Hangzhou, where he teaches at the China Academy of Art.

‘Art history is a long tale which tells us what happened in the past, but cannot tell us where new opportunities lie. The specific image of each genius exhausted with their life, is just a fleeting image in the film. The entire film is about waiting. Waiting is absurd, like art, a kind of eternal behaviour with no purpose, no ending.’ – Cao Shu (awn.com) 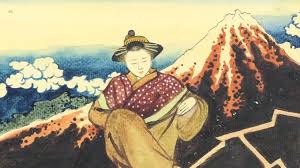 The unique video has been described;

“a fascinating montage in which centuries of artistic trends are packed into a single minute of film. Starting in ancient Egypt and continuing into present day, each image in this imaginative animation is a fleeting visual of the past.”

Cao Shu first released in One Minute Art History in 2015, but now re-released 3 weeks ago, exclusive for VIMEO.

The video takes viewers on a dizzying journey through various paintings and styles throughout history.  Cao Shu plays with the expectations of the viewer, defies the law of retinal persistence of the image and makes every second of the film a stratification of pictorial quotations and stylistic emulations that follow on one another in a paradoxical flight. (Milano Film Festival)

On the Edge: Experimental Shorts at OIAF 2016
Watch five more trailers here, for five of the abstract and experimental short films that screened at the 40th anniversary edition of the Ottawa International Animation Festival.