‘Look up here, I’m in heaven’  says David Bowie “His death was no different from his life – a work of Art,” explained Bowie’s producer Tony Visconti, in tribute. “He made ‘Blackstar’ for us, his parting gift. I knew for a year this was the way it would be. I wasn’t, however, prepared for it.” Creative to the very end, the ‘Lazarus’ video is a heartbreakingly sad way to bid farewell, but a more than appropriate one. On Nov 19th, 2015 David Bowie already had released Blackstar his 25th and final studio album, with this 10-minute visually compelling, and weird mini-movie. Directed by Johan Renck.

Bowie’s comeback was with the release of Bowie’s “The Next Day,” (2013) a great collection of of songs that looked back without being nostalgic. It was Bowie’s first album of new material in ten years, since 2003’s “Reality”, and surprised fans and media who believed he had retired. Of which my personal favourite released single was – Where are you now? – “Had to get the train From Potzdamer platz. You never knew that That I could do that Just walking the dead. Sitting in the Dschungel. On Nurnberger strasse. A man lost in time near KaDeWe. Just walking the dead.”

Berlin. This was the first freedom I’d had. All those so-called trappings of celebrity and my own problems. Really, I’m quite fond of that freedom that it gave me – David Bowie.

David Bowie was at his most riveting in two documentaries

To dig deeper in Bowie making of his last album with all this band members, highlighting five key years in Bowie’s career between 1971 and 1983, his final tour, and his final two albums “The Next Day” (2013) and “Blackstar” (2016) and Broadway musical “Lazarus.” I recommend watching this almost forgotten, skipped hidden gem – David Bowie: The Last Five Years. Directed by BBC music legend Francis Whately. The feature length documentary really shows his ability and love of his craft right to the unfortunate end. This with intercuts of last concerts, the making of his last album with Bowie as a voiceover. It’s a great mix of 70’s energy look and feel. You will understand and get to know more about Bowie’s last period. David Bowie never talks to camera, just comments some events as narrator.

I’m not an original thinker. What I’m best at doing is synthesising those things in society or culture, refracting those things and producing some kind of glob of how it is that live at this particular time. David Bowie.

Through the battling with cancer, the reality of Bowie’s ending career and people really close to him mentioning that they never saw him so happy during his last 2003-2004 A Reality Tour.  I sincerely hope that even now he’s gone that the current and coming generations. And will fall in love with his career, as did the babyboomers generation. Tony Visconti, Carlos Alamar, Gerry Leonard, Gail Ann Dorsey, Sterling Campbell, Mike Garson, Catherine Russell, just to name a few of his band members are all in the film being whoo discuss the creative process behind songs like “Golden Years,” “Let’s Dance,” and the anthem that might be the truest portrait of the artist, “Heroes.” And are completely honest who it really was to work with the ‘current’ Bowie. Having those only who actually knew him close, and not others who can only comment on his talent was a relief.

This program can only be viewed in the EU

“I don’t know where I’m going from here, but I promise it won’t be boring.” David Bowie.

And D.A. Pennebaker’s “Ziggy Stardust and the Spiders From Mars,”  a documentary of Bowie’s 1973 performance at London’s Hammersmith Odeon Theatre. He poses with a seductive sneer, heightened by makeup that is part courtesan, part zombie. The coppery aura of his mullet crowns eyes that are alternately reptilian and angelic. Pennebaker’s hand-held cameras pursue Bowie as he whips fans into ecstasy with such ’70s anthems as “Changes,” “Space Oddity,” and the less danceable, more ominous “My Death,” with the lyrics:

So confident, I’ll go his way

Whistle to him and the passing time.

Unlike in Pennebaker’s “Dont Look Back” (1967), an account of Bob Dylan’s 1965 British tour, there’s no downtime in hotel rooms or limos where Bowie can relax and just be himself (when Dylan does this, he is even more of an enigma). 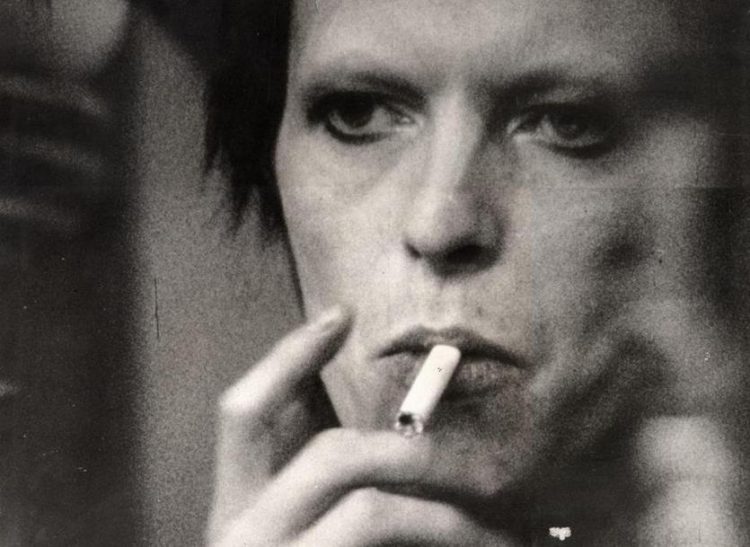 Instead, everything is performance, and Pennebaker’s camera is caught up in the whirlwind of the music, the taunting striptease of wardrobe and personae. Before each costume change, the screen goes black and Bowie is back in the dressing room, where assistants take off one Ziggy carapace, revealing the pale pupa of his scrawny body, and replace it with another. (source: Peter Keough – BostonGlobe)