Although still in its early days, Donald Trump’s presidency is coming under fire. The Russians are alleged to be in possession of sensitive information about Trump. And that exposes Trump to blackmail.

ZEMBLA, a Dutch television documentary program is investigating another explosive dossier concerning Trump’s involvement with the Russians: Trump’s business and personal ties to oligarchs from the former Soviet Union. Powerful billionaires suspected of money laundering and fraud, and of having contacts in Moscow and with the mafia. What do these relationships say about Trump and why does he deny them? How compromising are these dubious business relationships for the 45th president of the United States? And are there connections with the Netherlands? ZEMBLA meets with one of Trump’s controversial cronies and speaks with a former CIA agent, fraud investigators, attorneys, and an American senator among others.

A ZEMBLA investigation suggests that Bayrock siphoned off $1.5 million dollars by setting up a corporate structure in the Netherlands in 2007. In New York, Bayrock also stands accused of large-scale tax fraud. This incriminating information could place Donald Trump in an extremely difficult position, claims attorney F. Oberlander, who is prosecuting Bayrock on behalf of the State of New York: “The maximum jail term would be 30 years. So you’re in really serious trouble.” – Read more here

ZEMBLA goes viral in the US! 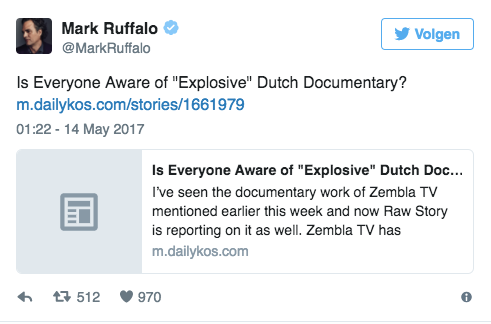 Fake news, tweets Trump: “I have nothing to do with Russia – no deals, no loans, no nothing!

Trump swears he has no ties with the Russians. But is that actually the case?’ the programme asks. The film attempts to answer questions about Trump’s Russian connections: What do these relationships say about Trump and why does he deny them? And how compromising are these dubious business relationships for Trump?” Watch the film and judge for yourself.  (Alexandra Clinton – Salon.com)