The International Documentary Film Festival Amsterdam (IDFA) is the world’s largest documentary film festival held annually since 1988. Over a period of twelve days, it screens more than 300 films, sells more than 250,000 tickets and welcomes more than 3,000 guests. 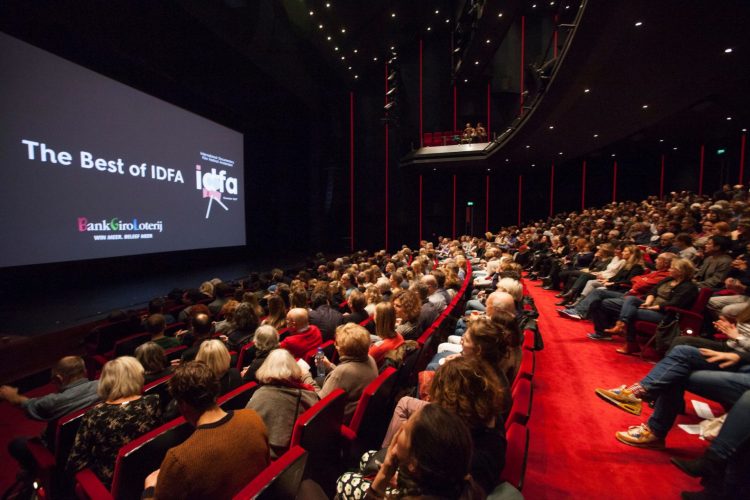 The festival is an independent, international meeting place for audiences and professionals to see a diverse (in form, content and cultural background) program of high-quality documentaries. IDFA selects creative and accessible documentaries, which offer new insights into society. In its mission statement, IDFA says it ‘strives to screen films with urgent social themes that reflect the spirit of the time in which they are made’.

Q&A IDFA 2018
Personally going into my 10th year as a Q&A moderator for this extraordinary beautiful festival. Hereby my list of films that I personally think you should go, and see:

From Columbus, Ohio to Guerrero, Mexico and countless cities in between, the opioid epidemic has ravaged communities on both sides of the border. But what about the lives behind the headlines and statistics? The timely, provocative new five-episode SHOWTIME docu-series THE TRADE spotlights the crisis through the eyes of those most affected: the growers, addicts, cartel bosses and law enforcement hopelessly caught in its web.


A portrait of the performance poet Umar Bin Hassan and his personal struggle with the revolution he propagated himself with The Last Poets. This visual spectacle is made by three Dutch filmmakers: Daniël Krikke, and Thomas Fibbe, Stijn Waterman.

What are the odds that you would turn up for your first day at a new school and be mistaken for a brother you didn’t even know you had? And then to make the story even more bizarre, before long another person turns up whose genetic similarity is unmistakable

In precisely composed shots, Nikolaus Geyrhalter explores the few square kilometers around the Brenner Pass, telling an urgent story about Europe in the process

Piazzolla, the Years of the Shark by Director Daniel Rosenfeld
World premiere at IDFA 2018

An intimate portrait of the famous Argentine bandoneon player and composer Astor Piazzolla, who revolutionized the tango

Previously unseen drawings by Orson Welles provide the basis for an essay in the form of a letter from director Mark Cousins to this film icon.

Behind the scenes with superstar Ed Sheeran: an intimate and musical account of the production process for his latest album Divide.

This descent into the mysterious world beneath the city is like science fiction—a claustrophobic visual masterpiece.

There’s magnificent natural beauty in this philosophical exploration of the relationship between humans and animals, and how to portray it

A tense archive film about the criminals who rule the streets of Naples, this is also a review of Italian TV journalism over the years.

Célébration – Un Film d’Olivier Meyrou
Yves Saint Laurent was the last of the great Parisian couturiers. In 2002, he bid the fashion world adieu with one final collection. Celebration is an immersive experience in an industry that can sometimes feel like you’re on another planet. This portrait of a fashion icon in those final years takes the form of a panoramic, no-nonsense montage of observations behind the scenes, with Saint Laurent seeming fragile and at times a little remote.

A fantastically documented portrait of flamboyant fashion designer Vivienne Westwood, who has most recently become a climate activist.

Blue Note then and now: the history of the legendary jazz label retold by musicians young and old, as well as their fans.

An infectious, richly documented history of the legendary British record label that brought ska, rocksteady, reggae and dub to a wider audience.

John McEnroe: In the Realm of Perfection by Director Julien Faraut
Dutch premiere at IDFA 2018

Tennis and cinema become one in this unorthodox hybrid of sports documentary and visual essay about John McEnroe’s heyday.

A close account of the first year of Putin’s presidency, in which Vitaly Mansky also questions his own role: witness or silent accomplice?

The State Against Mandela and the Others by Directors Nicolas Champeaux, Gilles Port

2018 marks the centenary of Nelson Mandela’s birth. He seized center stage during a historic trial in 1963 and 1964. But there were eight others who, like him, faced the death sentence. They too were subjected to pitiless cross-examinations. To a man they stood firm and turned the tables on the state: South Africa’s apartheid regime was in the dock. Recently recovered archival recordings of those hearings transport us back into the thick of the courtroom battles.

Witness the rise, fall and resurrection of Kate Nash in this intimate portrait of a talented singer-songwriter who risked it all to remain true to herself.

An unsettling portrait of a right-wing paramilitary group of Slovakians, who train in the forest every weekend, preparing for the coming war

Hale County This Morning, This Evening by Director RaMell Ross
The Black Belt in the Southern United States is known for its history of slavery and poverty. RaMell Ross, who worked here as a teacher and basketball coach for years, paints a more multifaceted picture in his debut feature documentary

Aleppo: The Silence of the War by Director Amir Osanlou
World premiere at IDFA 2018

Powerful images of devastation in the Syrian city of Aleppo. The sounds of war have fallen quiet, and all that remains is a terrifying silence.

Angels Are Made of Light by Director James Longley

Oscar-nominated filmmaker James Longley (Iraq in Fragments) has found an effective form to explore the divisions in society and collective concerns. Young and old, men and women: they all voice their thoughts in the soundtrack, as the camera shows ruined neighborhoods and cold classrooms. Nevertheless, the message isn’t without hope, and a sense of optimism shines through.

With their father in prison, three Mexican brothers care for their elderly grandmother, who is suffering from dementia.

The Barricade by Director Bruno Masi
Dutch premiere at IDFA 2018

Equal opportunities for all? This compelling series about an American high school is a biting exposé of the different standards for students from a variety of backgrounds.

The 82-year-old Firouzeh prefers a hard, solitary herder’s existence with her cows to a more comfortable life among people.

Born in the USSR: 28Up by Director Sergei Miroshnichenko

The British Up series by Michael Apted was a global success. So much so that the idea was copied in several countries, including Russia. Under the wings of Apted himself, the project selected a group of Russian children who have been filmed every seven years; the first episode was rereleased in 1991

Donald Trump is not the disease, but the symptom of a bankrupt U.S. democracy that began selling its soul to big corporations decades ago.

From award-winning documentary filmmaker E. Chai Vasarhelyi and world-renowned photographer and mountaineer Jimmy Chin, comes FREE SOLO, a stunning, intimate and unflinching portrait of free soloist climber Alex Honnold, as he prepares to achieve his lifelong dream: climbing the face of the world’s most famous rock… the 3,200ft El Capitan in Yosemite National Park… without a rope.

Exploring the legacy of the woolly mammoth. While hunters search for valuable tusks buried in Siberia, scientists attempt to clone this extinct animal.

Composer Giacinto Scelsi believed his work came to him from the gods. Discover the mysterious beauty of his world and his music.

Heart of a Dog by Director Laurie Anderson

The life of artist-musician Laurie Anderson took a dramatic turn in 2011 with the death of her companion for many years, an intelligent, stubborn and much-loved terrier named Lolabelle. Not long afterwards her mother died, and just two years later came the death of Velvet Underground front man Lou Reed, her partner of 21 years.

Casabianda is a detention facility that houses mainly sex offenders. A breathtaking, observational quest for humanity.

Desolate, mysterious scenes and a fantastic soundscape reconstruct a trek into the subarctic wilderness in the footsteps of an Irish forester

Marceline. A Woman. A Century by Director Cordelia Dvorák
World premiere at IDFA 2018

A portrait of Marceline Loridan-Ivens, a writer and filmmaker who, having survived the Holocaust, never let anyone constrain her again.

In this urgent story that makes an acute problem tangible, the inhabitants of Newtok, Alaska are seeing their village literally vanish due to climate change.

Steve is a warehouse worker in Hull, England who uses music to make a small but important difference in the lives of local children, despite his own difficult circumstances.

Brazilian transgender legend Luana Muniz (1961-2017) is our guide as we explore Rio de Janeiro in this sensual and hallucinatory film essay about identity and self-expression.

Disturbing images combine with heartrending testimony in an indictment of the deadly abuse of power by police officers in Rio de Janeiro.

Grandparents Svetlana and Victor live in abject poverty with their son Sergei and their grandchildren, in a cramped house in a half-deserted Russian village. They’re a contemporary version of Van Gogh’s The Potato Eaters—cabbage and potatoes are their staple diet.

The Raft by Director Marcus Lindeen
Dutch premiere at IDFA 2018

A look back at a fascinating 1973 social experiment: put a group of people on a raft for three months and see what happens.

The Sound of Masks by Director Sara de Gouveia

Mapiko is a traditional masked dance performed exclusively by the male members of the Makonde community living in northern Mozambique. During the Mozambican War of Independence in the 1960s, this dance became a tool to challenge colonization. His Mapiko dancing skills gave Atanásio Nyusi the opportunity to become a professional dancer and avoid fighting in the civil war that followed independence. In relating his life story, the now legendary dancer also leads us through the history of Mozambique.

A disturbing but beautiful visual meditation on “swatting,” a gaming phenomenon in the borderland between virtuality and reality

The Village by Director Claire Simon
World premiere at IDFA 2018

A small village in southern France is the improbable setting for an ambitious documentary festival: a cultural utopia among the vineyards and cherry trees.

Letters published in the feminist magazine Ms. cover everything from nuclear energy to sex. Forty years on, the letters are read again

A powerful film set in the concrete jungle of Beirut, Lebanon, where three people are struggling to survive.

The rebellious Walaa is growing up with few prospects in the dangerous environment of a Palestinian refugee camp. The escape route she dreams of is to join the police