Five decades after his assassination, JFK has given his final speech.

When John F. Kennedy was assassinated in November 1963, the speech he was scheduled to make on that day in Dallas died with him. That is until last week, when the world heard for JFK’s voice speak these words the first time on The Times website.

Speaking on themes of freedom, power, wisdom and restraint, the 35th US president’s speech still resonates with life and the issues the world faces today.

Five decades after his assassination, JFK has given his final speech

The Dallas Trade Mart speech has gone down as one of the most famous speeches that were never made. 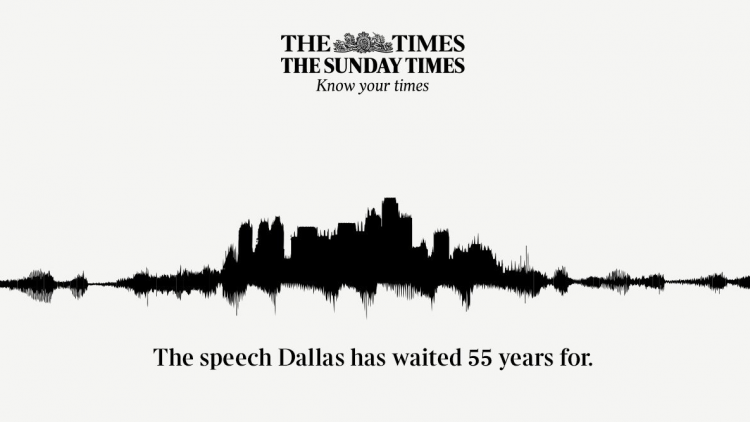 JFK’s 21-minute speech, which he had planned to deliver at the Dallas Trade Mart, was about the risks of populism and the importance of freedom.

“Ignorance and misinformation can handicap the progress of a city or a company, but they can, if allowed to prevail in foreign policy, handicap this country’s security,” the speech says.“In a world of complex and continuing problems, in a world full of frustrations and irritations, America’s leadership must be guided by the lights of learning and reason — or else those who confuse rhetoric with reality and the plausible with the possible will gain the popular ascendancy with their seemingly swift and simple solutions to every world problem.”

We in this country, in this generation, are–by destiny rather than choice–the watchmen on the walls of world freedom. We ask, therefore, that we may be worthy of our power and responsibility, that we may exercise our strength with wisdom and restraint, and that we may achieve in our time and for all time the ancient vision of ‘peace on earth, goodwill toward men.

JFK video: hear Kennedy’s ‘lost’ Dallas speech in his own voice.
On November 22, 1963 John F Kennedy was silenced. Fifty-five years later we have made it possible for him to be heard again, writes Aaron Rogan from The Times.

The eerie recording was published Friday on the website of the Times, the British newspaper that commissioned the project. Read the full article, and listen to the speech by registering to the London Times.

The speech President Kennedy was due to give on the day he was assassinated in November 1963 has been constructed in his own voice using new technology.

The project, called ‘JFK Unsilenced’ was the brainchild of Irish creative agency Rothco and tech company CereProc, who used the latest technologies in artificial intelligence and sound engineering (finessed by post production company Screen Scene) to create a convincing reproduction of JFK reciting the words he was due to deliver.

Sound engineers pulled 116,777 sound units from 831 of JFK’s speeches and radio addresses to recreate his voice, applying audio processing to remove noise and crosstalk, then spectrum analysis tools to improve acoustic environment and match them across samples.

Once the data was compiled, AI techniques such as Deep Neural Networks were applied to learn a model of JFK’s audio, and how he uses intonation in his speech. The audio was then finessed at post-production company, Screen Scene.

The Day of Affirmation speech was a speech given by Senator Robert F. Kennedy to National Union of South African Students members at the University of Cape Town, South Africa, on June 6, 1966.

In the speech Kennedy talked about individual liberty, apartheid, and the need for civil rights in the United States at a time when the American civil rights movement was ongoing.

“First is the danger of futility; the belief there is nothing one man — or one woman — can do against the enormous array of the world’s ills — against misery, against ignorance, or injustice and violence.

Yet many of the world’s great movements, of thought and action, have flowed from the work of a single man. A young monk began the Protestant reformation. A young general extended an empire from Macedonia to the borders of the earth. And a young woman reclaimed the territory of France. It was a young Italian explorer who discovered the New World, 32-year-old Thomas Jefferson who proclaimed that all men are created equal.

Give me a place to stand, said Archimedes, and I will move the world. These men moved the world, and so can we all. Few will have the greatness to bend history; but each of us can work to change a small portion of the events, and in the total of all these acts will be written the history of this generation…

“It is from numberless diverse acts of courage such as these that the belief that human history is thus shaped. Each time a man stands up for an ideal, or acts to improve the lot of others, or strikes out against injustice, he sends forth a tiny ripple of hope, and crossing each other from a million different centers of energy and daring those ripples build a current which can sweep down the mightiest walls of oppression and resistance…”

Speechwriter for President John F. Kennedy, Ted Sorensen had been Kennedy’s aide since the 1953 Massachusetts Senatorial election, and eventually served as his primary campaign speechwriter and as Special Counsel during and after the 1960 Presidential election.. By 1963 he had written drafts for nearly every speech Kennedy delivered in office, including the inaugural address, the Cuban Missile Crisis speech, and the Ich bin ein Berliner speech.

The American University speech, delivered at the height of his rhetorical powers and widely considered one of his most powerful speeches, Kennedy not only outlined a plan to curb nuclear arms, but also “laid out a hopeful, yet realistic route for world peace at a time when the U.S. and Soviet Union faced the potential for an escalating nuclear arms race.

“So, let us not be blind to our differences–but let us also direct attention to our common interests and to the means by which those differences can be resolved. And if we cannot end now our differences, at least we can help make the world safe for diversity. For, in the final analysis, our most basic common link is that we all inhabit this small planet. We all breathe the same air. We all cherish our children’s future. And we are all mortal.”