John & Yoko – Above Us Only Sky

Sat 24 Nov 2018 at 8:30pm UK’s Channel 4 (If you’re in the UK, you can watch it here) aired director Michael Epstein’s intimate account of the making of John Lennon’s landmark 1971 album Imagine: John & Yoko – Above Us Only Sky. It’s mesmerising to watch as George Harrison and the band bring to life songs that are already fully formed in Lennon’s mind and hear him modestly admit: “I don’t know whether it’s any good.”

How has this superb footage of the former Beatle and his wife Yoko Ono, captured at their home-studio, remained unseen for almost 50 years?

The doc features unseen footage from John and Yoko’s Berkshire home where much of it was recorded, is as close as you’re going to get. There’s testimony from musicians who played on the album, plus interviews with Yoko and eldest son Julian Lennon. But it’s John who commands the attention, bashing out his songs on the upright piano so the band can learn them, and telling fellow ex-Beatle George exactly what sort of guitar solo he’s after.

This wasn’t so much the untold story of the making of a classic album as a fascinating addendum to an iconic story which had already been told in the companion film released by Lennon, Yoko Ono and director Steve Gebhardt in 1972, and fleshed out even more in Andrew Solt’s tribute Gimme Some Truth. Here director Michael Epstein took the story further. He had access to Lennon and Ono’s personal archive and, for obsessives, unearthed previously unseen film footage writes film critic Gerard O’Donovan from The Telegraph.

Listen to Imagine (1971) by John Lennon, Yoko Ono and Phil Spector on Spotify

A Vietnam veteran shows up to John & Yoko’s doorstep claiming John Lennon’s songs are about him.

“The message of ‘Imagine’ is just as powerful today as it was when John and Yoko wrote it nearly fifty years ago,” Epstein told Variety in September. “I look at the world see it overcome with hate and engaged in wars seemingly without end, and I truly miss John’s voice. We need him now more than ever. And that is what we hope to do with ‘Above Us Only Sky,’ show how John and Yoko’s message of peace and love still matters.”

Terry Shand, CEO of Eagle Rock added: “With exclusive access to the extensive Lennon video, audio and photo archive, including much previously unseen material as well as interviews with a wide range of people directly involved with the recording, Above Us Only Sky is an exciting opportunity to tell this story fully for the first time.”

Imagine – John Lennon and The Plastic Ono Band (with the Flux Fiddlers)
Directed by John & Yoko, this was originally filmed on 22 July 1971, and is now seen with its full original intro sequence. A brand new transfer, taken from a first-generation 35mm inter-negative of the original 16mm Imagine film negative. Restored and remastered for the very first time in a stunning new digital transfer.

Imagine there’s no countries
It isn’t hard to do
Nothing to kill or die for
And no religion, too
Imagine all the people living life in peace
You 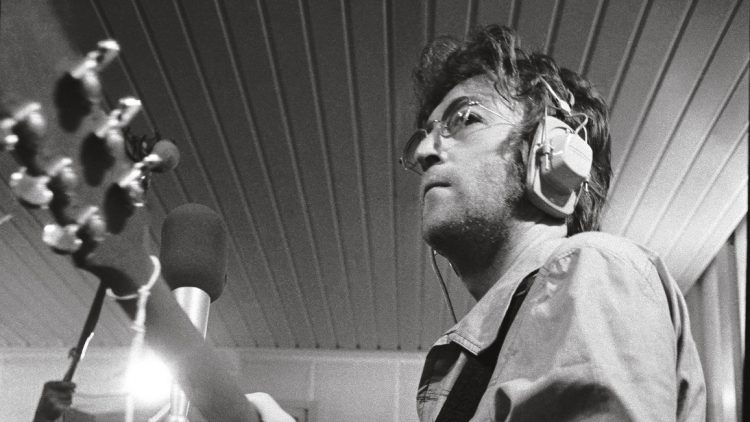 John Lennon and the Black Panthers.
45 years ago, John Lennon invited a founding Black Panthers member onto a famous American talk show. The issues they discussed then are just as relevant today.