Poverty is not on the agenda of america

A true One-to-Watch Documentary series following the police department in Flint, Michigan as they struggle with dwindling resources and crumbling infrastructure in a community crippled by violence and a contaminated water crisis.

The Producer Of ‘True Detective’ Made A Compelling Documentary About Flint, Michigan – by AnonymousContent

Not many TV shows can be as transporting as a well-made, long-form documentary series about a specific time and place. Flint Town is that kind of series. It takes you to a place that you probably wouldn’t visit unless someone you knew already lived there, a place that Hollywood’s fiction makers would likely never go, either, because so much of the dramatic landscape consists of deprivation, disappointment, and constant challenges, none of which will be solved by the arrival of a clever hero who doesn’t play by the rules.

In their Netflix docuseries, director-cinematographers Zackary Canepari, Jessica Dimmock, and Drea Cooper spend a year embedded with the police department of Flint, Michigan, a city reeling from a series of vicious blows to its body politic, sustained over a period of decades. First, General Motors, the city’s biggest employer, closed plants, laid off workers, and ultimately relocated to the suburbs (a move subsidized by the city of Flint itself). Then came the water crisis, which started when the city changed the source of its drinking water to the Flint River to save money but failed to treat the water properly, exposing more than 100,000 residents to lead contaminants.

The city depicted in Flint Town is a husk of its former self, and so is the police force that provides its focus. Despite its simple yet sweeping title, the series focuses on the day-to-day challenges of the city’s police department. It’s ultimately less of a “portrait of a city” documentary than a Cops-style look at the particulars of police work that just happens to be set in Flint, with artier, more atmospheric filmmaking (lot of tight, abstracted close-ups of objects illuminated by flashing red-and-blue lights), a much more frank assessment of how race and class issues affect community relations, and the kinds of glimpses of the officers’ home lives that the Fox series abandoned early in its run. The overall erosion of Flint and the cratering of its police department are intertwined, of course: In 2016, one of the African-American officers featured in the series, Brian Willingham, wrote a New York Times editorial that asked, “How can citizens in Flint trust the police to protect them when they can’t even trust their government to provide them with clean water?” But for the most part, Flint Town considers these issues in a universalizing way that could apply to any police department in any city with a diverse population.

Flint is poorest city in America.

As the series tells us, this is an underfunded and understaffed department scrambling just to get by. When the story starts in November 2015, the Flint P.D. has just 98 officers, down from 300 a few years earlier, and daily police work looks and sounds a lot like triage. An early call by Officer Bridgette Balasko sees her responding to a robbery 27 hours after the initial phone call. The rest of the story sees a change in management at both city hall (the election of Mayor Karen Weaver) and the police department (Tim “Two Guns” Johnson). The latter responds to an unconscionably high crime rate by promising to implement a more aggressive, “broken windows” style of policing that puts the citizenry on edge. The newest batch of 18 recruits includes a pair of officers who’d be criticized as too contrived if they appeared in a fiction series: Dion Reed and his mother Maria. 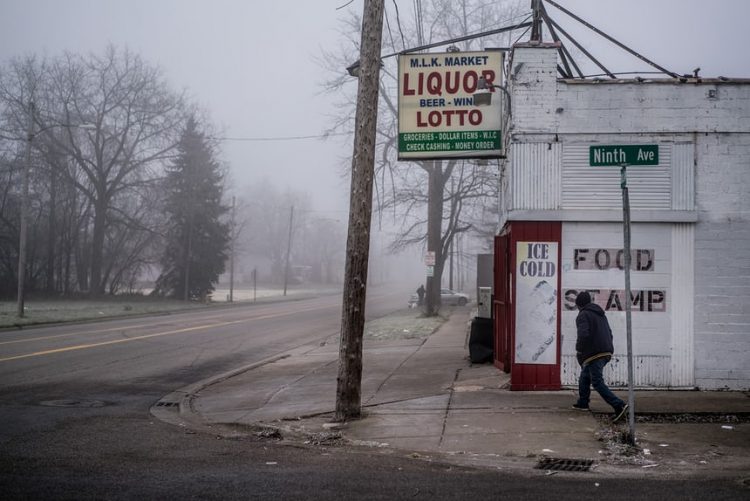 As intelligent and considerate as it is, the series has a somewhat repetitious feel until the third episode, which jumps ahead to July 2016, six months into the Chief Johnson’s tenure. From here through the end of the story, Flint Town shows how the mentality of American police is shaped by their personal politics, which in turn are shaped by their consistently unpleasant and sometimes fearful experiences on the job, as well as reactionary and sometimes racist attitudes handed down throughout the inception of modern policing. The series eventually starts weaving community reaction to the police into the story more insistently, in a way that creates dialogue between the officers and the public they’re supposed to protect and serve. Rather than just show how civilians react during traffic stops or at town meetings, the filmmakers have them sit for interviews (framed head-on, in the manner of a mid-period Errol Morris documentary) and go into nonpolice locales, such as Melly’s barbershop, where the predominantly African-American clientele speak freely.

The “us versus them” problem afflicts every major police department in the United States to some degree, and one of the most fascinating aspects of Flint Town is its portrait of how nonwhite police officers internalize that mentality even as they remain aware that it’s at odds with their own personal identity. The black officers depicted here are consistently more sensitive to appearances and better at talking to African-American suspects than the white officers, and more vocal about wanting the department to balance respect for the community against the mandate to bring down local crime stats. But in the end, they’re wearing the same blue uniform as the others. When black citizens tar them by association and claim (often in a heated moment) that they’re just the white man’s proxy, they demonstrate more solidarity with the department as a whole than when they’re sitting behind closed doors with their colleagues, talking about the fine points of procedure. It’s fascinating to see the 2016 election play out within the department: Most of the department appears to gravitate toward Trump, despite his blatant racist dog whistles, because Republicans have successfully built part of their party brand around “law and order,” which translates “more money for the police, and less questioning of how they do things.” By the time Election Day rolls around, the racial divisions in the community as well as the department are glaringly obvious. 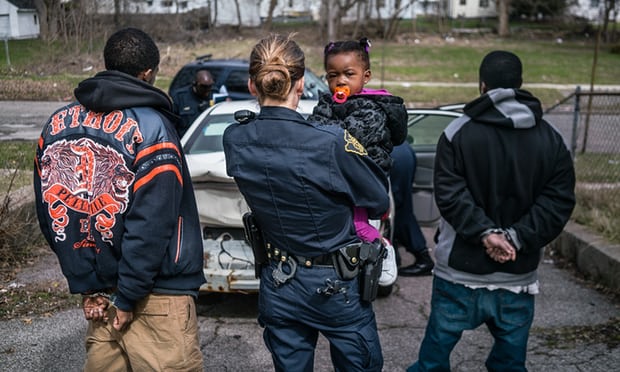 We get a harbinger of this in a scene where a group of officers (including Balasko’s husband, Sergeant Robert Frost, a conservative who has a much more adversarial point-of-view than some other characters) watch footage of the shooting of Philando Castile, who was shot and killed by a Minnesota police officer after being pulled over for a broken taillight. Both the black and white officers in the room close ranks and look for details that bolster the narrative that if Castile hadn’t done something wrong, he’d still be alive. One white officer even says that the victim’s girlfriend Diamond Reynolds — who was in the car with her 4-year old daughter, yet captured the aftermath on her cell phone and managed to keep a cool head while talking to the officer and narrating the event — was “callous” for recording the incident in the first place. Other incidents in Dallas, Baton Rouge, and New York all serve as catalysts for discussion of community relations and police brutality, but Flint Town stays rather stubbornly on the inside looking out. It doesn’t quite take the officers’ side, but it sees their point of view. You may come out of the series having your prejudices, whatever they are, confirmed. Or you might leave Flint Town feeling grateful that the officers were willing to be so frank about how they view the world that they travel through each day, however conflicted and alarming that view might be.