The Spider’s Web: Britain’s Second Empire, is a documentary film by Director Michael Oswald (Prod. co Queuepolitely) that shows how Britain transformed from a colonial power into a global financial power. At the demise of empire, City of London financial interests created a web of offshore secrecy jurisdictions that captured wealth from across the globe and hid it behind obscure financial structures in a web of offshore islands.

“British banks today, just as in the 19th century, don’t put their money into British manufacturing, they put their money into real estate speculation, into financial speculation, foreign currency trade. So, the financialization of London has helped de-industrialise the country, because it has enabled sterling to be supported by this huge inflow of hot money, this inflow of drug dealing money, criminal money and tax evasion money.” — Michael Hudson

An urgent, informative film asking all the right questions – or how the rich people stole all the money – Steve Morrissey

With contributions from leading experts, academics, former insiders and campaigners for social justice, the use of stylized b-roll and archive footage, the Spider’s Web reveals how in the world of international finance, corruption and secrecy have prevailed over regulation and transparency, and the UK is right at the heart of this.

“This film is shocking, persuasive, factual and shaming. Watch it and you won’t view bankers, lawyers, accountants or many in our political elite in the same way ever again.” – Richard Murphy – Professor of Practice in International Political Economy, University of London.

“The World Bank spends a lot of time studying poverty and measuring it endlessly, but they don’t study inequality” 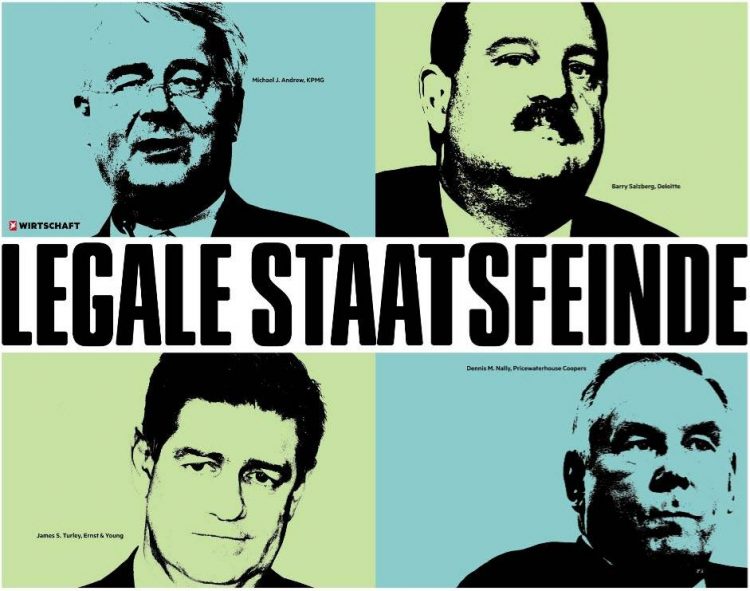 Quote comes from James S. Henry. Writer of a book called The Blood Bankers (Amazon). The photo above is from Germany’s news magazine called Stern. The article names the global heads of the Big four accountancy firms: Deloitte, Ernst&Young, KPMG and PWC: Legal Enemies of the State: ‘legal subversives.’ Why?

Because of the men behind these companies, and corporations like IBM, ENI, Amazon, Starbucks, Microsoft, Gazprom, Wal-Mart, Apple, Google etc. pay almost no corporate tax. FACT1: Starbucks ‘paid no UK income tax’ since 2009. The international coffee chain reported losses in the UK despite sales of £1.2bn. FACT2: Apple sells around 20million ipads a year in 2011. The ipad sells for around $500,- dollar in retail. That’s $10billion in turnover. In China Apple employs 1.2 million Chinese workers to make these Ipads. Apple pays China around $40 dollar per Ipad that’s around $800,- million dollar out of the $10 billion dollar. The total gross margin of Apple is at around $6 billion dollars over Non US profits. So where is the rest of the money going? Well they park around $2.2. billion dollars of royalties offshore in low tax havens. But the interesting thing is that the total effective tax Apple paid in 2012 in the US was 1.9% were It should be paying 35% over non US profits. So the Accountancy firms with their 700.000 staff skilfully create tax tricks.

“It’s about time we drag them out of their loopholes”,  says the brilliant journalist from Stern.

And I agree. A pure form of “Pin Stripe Mafia” (Keynote Norway 2013) (PDF). Accountancy expert Prem Sikka says: “A lack of transparency and strict secrecy are part of the business model of the Big 4. As with the banks, nobody dares to break the wall of silence.” A US senate report even revealed how these firms create new tax avoidance schemes in sales pitches: “the clients do not receive computer files. Nothing is noted on paper. The sellers write everything on boards, which they wipe off afterwards.”

Let’s start! Have you ever heard of tax structures such as the ‘Double Irish’, ‘Cayman Special’, ‘Dutch Sandwich‘ and lesser-known ones such as ‘Cobra’, ‘Soap Picante’, and ‘Pita’. No, well that’s because there’s no mainstream media outlet is reporting on them. We also think of the popular imagination that the Caribbean islands is the most popular tax haven but the truth of the matter is it includes the United States, United Kingdom, the Netherlands, Luxembourg and Ireland. All powerful OECD countries. If you look at the Netherlands for example, De Volkskrant, a Dutch news paper revealed that 97 of the 100 largest companies in the world are active in the Netherlands. These 97 multinationals swapped at least € 57 billion through the Netherlands, according to the newspaper. Sounds spectacular, but in reality these figures are the tip of the iceberg. In total, 13 trillion flows through the Netherlands, Bloomberg also knows. And, as the Dutch Financial times writes, it is difficult to really make out from the balance sheets that these tax avoiders deposit in the Dutch Trade Register.

At least 60 of them operate in the Netherlands only for the purpose of tax evasion through so-called “mailbox firms”. These companies have confidentiality agreements – called tax rulings – with the Dutch tax authorities, and paid between 0 and 5 percent tax on the money they brought to and from the Netherlands. And while the European Parliament voted to ban the use of mailbox firms for tax evasion purposes last year, so far no real action has been taken by the Dutch government to stop the practice, even though the revenue gained by the Netherlands by allowing it (~1 billion euros) is small compared to the total cash flowing through the country. Why allow it then? If you want to know more I highly recommend The Tax Free Tour documentary paid by Dutch tax payers money namely produced by the Dutch Public broadcaster VPRO.

Backlight: The Tax Free Tour (53:03)
About tax havens used by multinationals to park an estimated trillion dollars without paying tax.

Yes, I know it will always be Savers vs Speculators and the Working class vs Capital class, but right now, the people are clearly being crushed…And yes…..Eva Joly, French magistrate and politician for Europe Écologie–The Greens said beautifully: “I’ve put my hope on it’s citizens, I hope Londoners one day will be fed up the fact that only the middle class and the poor pay taxes while StarBucks, IKEA, Total and Coca Cola don’t pay taxes. Hopefully citizens will rise in revolt against that.” YES PEOPLES SAY IT!!! “I’m as mad as hell and I’m not going to take it anymore!” (VIDEO) I personally think that the revolt with it’s push back movement will be coming from Beppe Grillo (VIDEO) in Italy, and will slowly move it’s way up for the North.

What can we do? Go HERE! 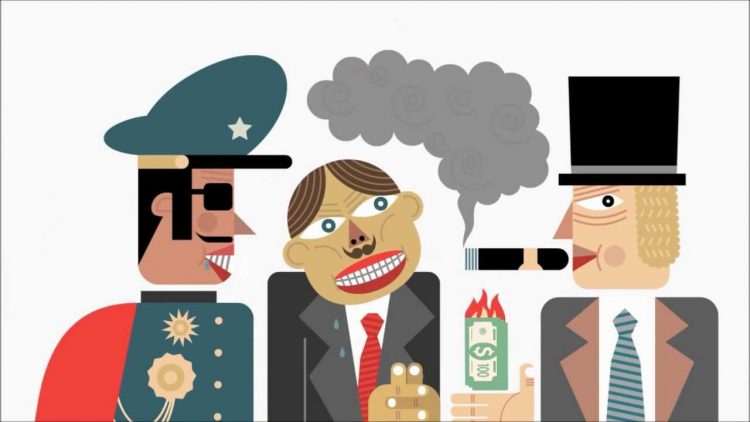 FOUR HORSEMEN – an award winning 2013 independent feature documentary which lifts the lid on how the world really works. As we will never return to ‘business as usual’ 23 international thinkers, government advisors and Wall Street money-men break their silence and explain how to establish a moral and just society

From Academy Award® nominated filmmaker, Charles Ferguson (“No End In Sight”), comes INSIDE JOB, the first film to expose the shocking truth behind the economic crisis of 2008.

All we need to realize that It’s just a ride!!…and we can change it anytime we want. It’s only a choice. The eyes of fear wants you to put bigger locks on your door, buy guns, close yourself off. The eyes of love, instead see all of us as one….right BILL!!! Rest in Peace my man…