Where do cosmic rays come from?

Four billion years ago—before the first life had developed on Earth—a massive black hole shot a proton out at nearly the speed of light. A result of this cosmic catapult was the creation of a neutrino, a strange, tiny particle smaller than any other known type of matter.

Fast forward—way forward—to 45.5 million years ago. Early primates and elephants had just appeared on Earth. At that time, the Antarctic continent had started collecting an ice sheet. Eventually Antarctica would capture 61 percent of the fresh water on Earth, creating an ice box of continental scale.

An enormous ice cube at the South Pole is revealing mysteries about the universe.

Thanks to XSEDE resources and help from XSEDE Extended Collaborative Support Service (ECSS) experts, scientists running the IceCube Neutrino Observatory in Antarctica and their international partners have now connected those distant events. That connection gave a first answer to a hundred-year-old scientific mystery: Where do cosmic rays come from?

The first source of high-energy neutrinos
Featuring IceCube’s PI and spokesperson along with other experts from the collaboration, this video explains the observations that led to the identification of the first source of high-energy neutrinos and cosmic rays. These results help us answer a one-hundred-year-old riddle: where and how does nature accelerate particles to the highest energies ever detected?

Across the globe, miles beneath mountains, under polar ice caps, and below the ocean are massive facilities filled with sensitive and obscure instruments. They are manned by scientists working to snatch signs of nearly undetectable particles that could, all at once, be used as a tool for understanding supernovae, the impossibly dense interiors of stars, and potentially provide insight into the origin of the universe. These facilities detect neutrinos, at once the most ubiquitous particle we know of and the most difficult to detect.

Every second, about 65 billion neutrinos pass through every square centimeter of your body.

Every second, about 65 billion neutrinos pass through every square centimeter of your body. They originate from, among others, the dense cores of stars, supernovae, nuclear reactors, and the Big Bang. Like anything this small, they behave in bizarre ways. Neutrinos can exist with three different masses, but—because this is the quantum world and nothing is allowed to make sense—a single neutrino exists with those three different masses at the same time in different proportions. Because heavier or lighter masses travel at different rates of speed and because a neutrino is made up of three different masses at once, the neutrino’s mass mixture changes over time. The proportion of these three masses in a neutrino define its properties, and because that proportion is constantly changing, neutrinos oscillate between different “flavors”: electron neutrinos, muon neutrinos, and tau neutrinos. Simple stuff. Who said particle physics was hard? 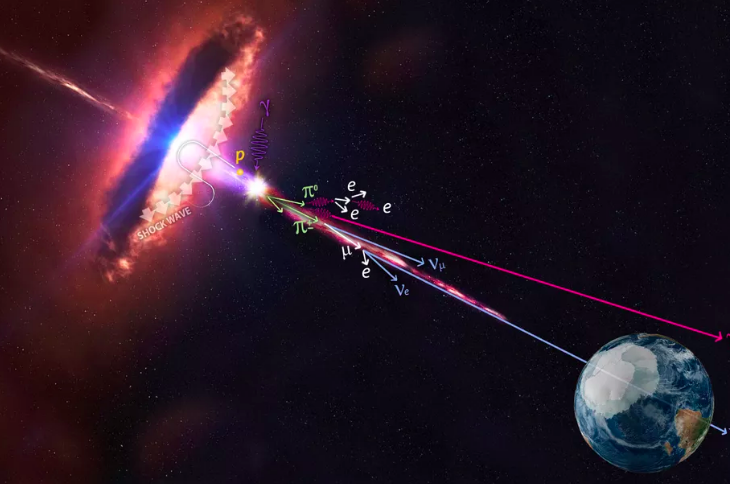 Fortunately, there are scientists out there who understand the minutiae of particle physics far better than you or I do. Based off of our current understanding of physics, researchers can observe and measure neutrinos in detectors and, using those observations, uncover incredible things about the universe. 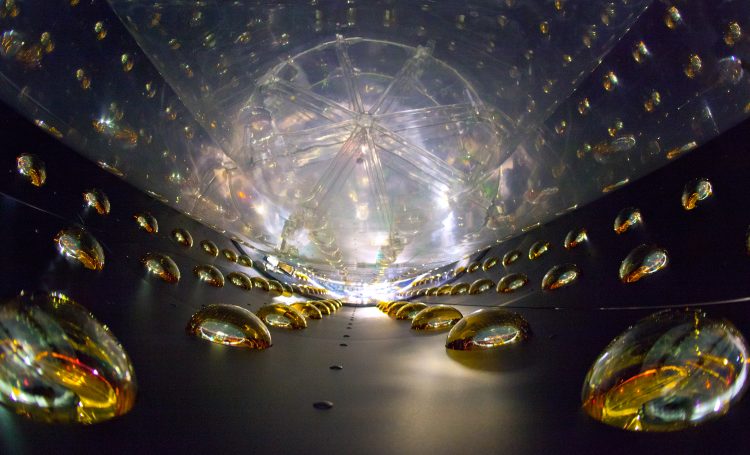 Since 1912, the origin of cosmic rays hurdling through outer space has puzzled scientists.

Neutrino detectors are massive feats of engineering. Although neutrinos are so abundant, they are notoriously difficult to detect. They have no electrical charge (hence their name neutrino, Italian for “little neutral one”), and their masses are so slight that they were originally thought to have none at all.

How Are We Searching For Dark Matter? And How Do We Even Know It’s Real?

Physicists are persistent animals, though, and they have devised detectors capable of observing neutrinos indirectly. In Japan, the Super Kamiokande detector (or Super K) is buried 3,300 feet underground beneath Mount Ikeno. Many neutrino detectors are located deep underground in order to minimize the interference of cosmic rays on the detectors. While it might seem empty, space is a noisy place; an infinity of different signals are constantly bouncing around, and reducing this noise is one of the main challenges of a neutrino detector. 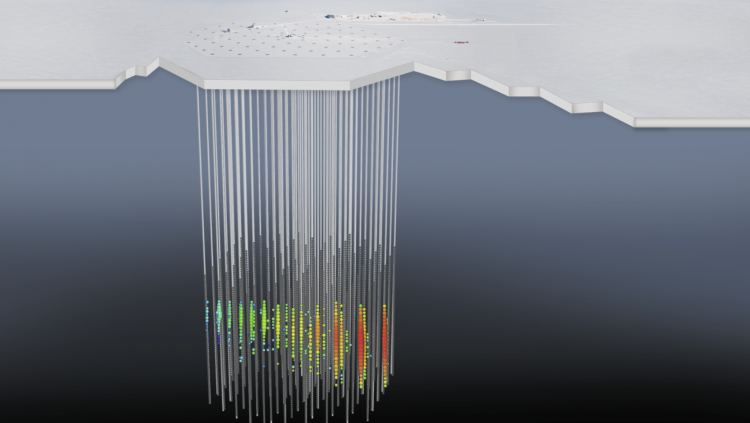 Super K’s detection relies on something called Cherenkov radiation. Essentially, Cherenkov radiation is the light produced when a particle travels through a medium faster than light. Nothing travels faster than light in a vacuum, but light is slowed down when travels through a medium like water, for instance, while other particles are not. The result is the eerie blue glow produced in nuclear reactors, which is analogous to a sonic boom but for light: Just like a fighter jet produces sound waves that travel slower than the jet itself, the particle produces light waves that travel slower than the particle itself

When a neutrino strikes the nucleus of an atom in Super K’s water tank, the atom produces particles that move faster than light through water. The resulting cone of Cherenkov radiation is then measured by Super K’s hundreds of sensors, and the data can be used to characterize the neutrinos that passed through the detector. Using data like this, Super K was one of the first detectors to confirm that neutrinos oscillate between their three different flavors by observing muon neutrinos shift into tau neutrinos, bringing us one step closer to comprehending how these particles function in the universe. 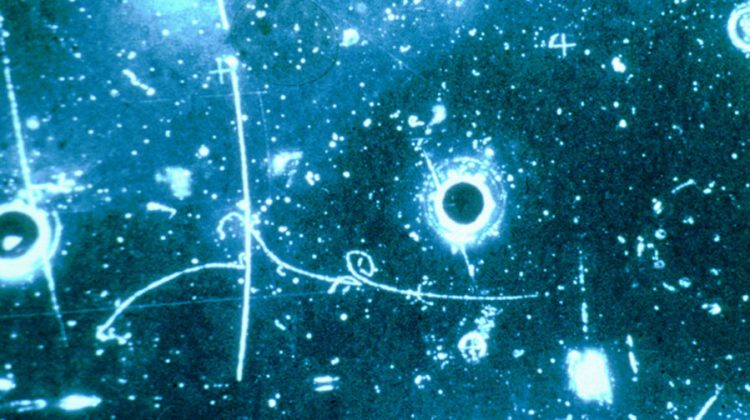 Another notable detector, IceCube, is located in the Antarctic. Its sensors are located a mile and half below the polar ice, and like Super K, IceCube relies on Cherenkov radiation. In this case, however, the neutrinos pass through the ice around IceCube’s sensors and occasionally create charged leptons—these are like neutrinos but differ in that they have an electrical charge. They travel through ice faster than light does, producing Cherenkov radiation that can then be measured by IceCube’s sensors.

IceCube was the first detector to locate an extrasolar object in space using neutrinos. This object was a blazar, a phenomenon that occurs at the center of galaxies with supermassive black holes, in which gargantuan, high-energy beams of energy are shot out into space from the galaxy’s core. Of the many trillions of neutrinos predicted to have been ejected from the blazar (and I mean many trillions)… IceCube detected 28.

A new and ambitious neutrino detector

The Deep Underground Neutrino Experiment (DUNE), currently under construction, will be the most advanced neutrino detector to date. DUNE will work in tandem with Fermilab’s Tevatron particle accelerator, the second-most powerful particle accelerator in the world after the Large Hadron Collider.

DUNE is being built 810 miles away from Fermilab in South Dakota, and its sensors will be aimed at a beam of trillions of neutrinos originating from the Tevatron particle accelerator. It, along with other neutrino detectors, has a rather ambitious goal: finding out why stuff exists rather than not

Neutrinos may shed light on this mystery. For a variety of reasons, physicists think that neutrinos and anti-neutrinos oscillate into different flavors at different rates; specifically, anti-neutrinos may oscillate more slowly than neutrinos. If this is true, then it means that there is a fundamental imbalance between particles and antiparticles, helping to explain the glut of matter and the absence of antimatter in our universe

At DUNE and similar neutrino detectors, physicists hope to observe this phenomenon in action. With any luck, these massive engineering undertakings will bring us closer to understanding the fundamental nature of the universe.

written by Matt Davis from BigThink.com