A look at The New York Times

In these times when journalism is being questioned and attacked as “fake news,” Emmy®-winning and Oscar®-nominated filmmaker Liz Garbus (What Happened, Miss Simone?) turns her lens on The New York Times in THE FOURTH ESTATE, revealing the challenges, triumphs and pitfalls of covering a president who has declared the majority of the nation’s major news outlets “the enemy of the people.”

Embedded for the past year with The Times and granted unprecedented access and interviews with editors and reporters on the front lines, the docuseries presents a groundbreaking portrait of the men and women who are fighting for freedom of the press. And chronicles the changing nature of journalism in the age of Twitter, podcasts and the 24-hour news cycle.

Viewers will witness the inner workings of journalism and investigative reporting during this administration’s first history-making year. 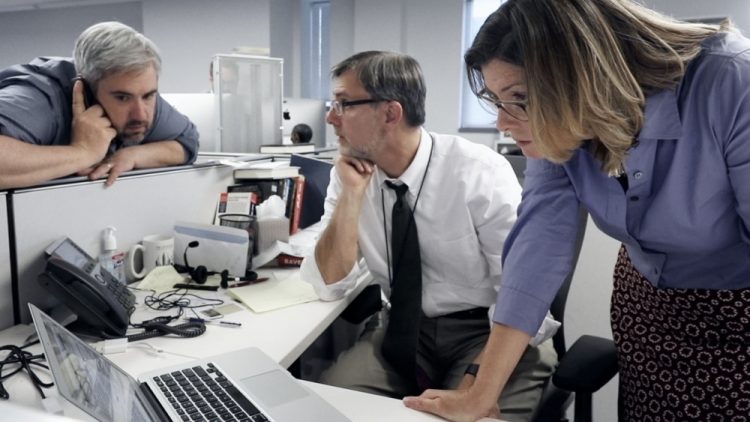 “At a time when so many of the mainstream media misread the mood in the USA and beyond, this series offers a candid, shocking and illuminating exploration of the shifting relationship between journalism and political power.”

The series was produced by Radical Media and Moxie Firecracker Films Production, in association with Impact Partners and Showtime Documentary Films.

Dutch NPO Picks Up ‘Inside The New York Times: The Fourth Estate’ as well.

The First 100 Days (aired Tuesday May 29th on NPO 2)
“The first three months of Trump’s presidency tests the stamina of the political reporters at The New York Times as they adapt to a nonstop news cycle, an unpredictable White House, and the President calling them “the enemy of the people.”
Watch full ep. here

American Carnage
As violence erupts in Charlottesville, the president’s unwillingness to denounce the racist hate groups presents a new test for journalists. Trump blames the “failing New York Times” and “crooked media” for distorting his speech and further deepening the country’s divisions. Meanwhile, Steve Bannon exits the White House and a Times reporter questions where his populist revolution is headed now, as the paper deals with reining in its own reporters on Twitter.
Episode will air on June 12 NPO 2 22:55 (CEST)

Matters of Fact
The New York Times reporters learn that the President’s former national security adviser, Michael T. Flynn, has pled guilty to lying to the FBI, bringing the Russia investigation closer to Trump’s inner circle. As the paper leads the reporting on workplace sexual harassment, allegations of past misconduct by one reporter in the bureau bring the story home. And for all the attacks on the free press over the course of Trump’s first year in office, the paper is rewarded for what it does best: good reporting.
Episode will air on June 19 NPO 2 22:55 (CEST)

On this special occasion, The John Adams Institute will bring in two award-winning journalists of The New York Times’ Washington bureau for an on-stage Q&A after the screening of the first episode: Mark Mazzetti and Adam Goldman, both seen in the series.

Mazzetti and Goldman are members of the newspaper’s ‘Russia team’, reporting on Russia’s meddling in the 2016 presidential election and the Mueller investigation, for which they were recently awarded with a Pulitzer Prize.

Eelco Bosch van Rosenthal, reporter/anchor for Nieuwsuur and a board member at the John Adams Institute, will moderate a Q&A with both journalists and audience.