Memorizing these three statistics will help you understand the world

One of my favorite websites is OurWorldInData.org. Based at the University of Oxford, it uses statistics—on everything from health and population growth to war, the environment, and energy—to give you phenomenal insight into how living conditions are changing around the world. I asked its founder, Oxford economist Max Roser, to share three facts from the site that everyone should know. Here’s what Max had to say. – Bill Gates.

Knowing the facts on global changes gives you the context for the daily news and allows you to make sense of new information that you learn.

Explore the ongoing history of human civilization at the broadest level, through research and data visualization.

In the past few years, it has become easy to find many of the important statistics on global development with a quick online search. And since it is now so easy to find the information you need, many argue that it doesn’t make sense to actually remember these statistics. ‘Just look them up when you need them!’ they say. I disagree with this. Yes, for some details, it makes sense to just search for them when you need them. But for the large global developments, it is important to know some basic statistics that describe living conditions currently and the direction of change that we have seen over the past few decades. Knowing the facts on global changes gives you the context for the daily news and allows you to make sense of new information that you learn. And it must be the basis for political debate, so that we can discuss what we should and shouldn’t do as a society. And so I compiled a short list of three facts about global living conditions that I want to remember. Each of them describes the current situation and the direction of change.

Imagine how awful it must be to see your child die.

Then consider that every minute this happens to about 11 parents. This is the number of children, younger than five years of age, who die—on average—every single minute. Eleven deaths every minute for 24 hours add up to 15,500 deaths per day, or 5.6 million deaths per year.

Do we just have to accept that? Is that just how the world is?

Clearly no. We are very much able to drive positive change. Look at the chart below. The same UN data that shows us that 5.6 million are dying today also shows us that in the 1950s and 60s the world saw around 20 million children dying every year.

One key reason why we struggle to see progress in the world today is that we do not know how very bad the past was.

Both are true at the same time: The world is much better than in the past and it is still awful.

To bring this to mind I need to know both statistics: When someone says we can sit back and relax because the world is in a much better place, I point out that 11 children are still dying every minute. We cannot accept the world as it is today. And when I feel hopeless in the face of this tragedy, I remember that we reduced annual child deaths from 20 million to 5.6 million in the last fifty years.

So I am remembering the current extent of child mortality and the direction of change that we have seen: The number of child deaths is falling; there were 3.5-times as many child deaths 50 years ago. But child deaths are still extremely common; 11 children are dying every minute 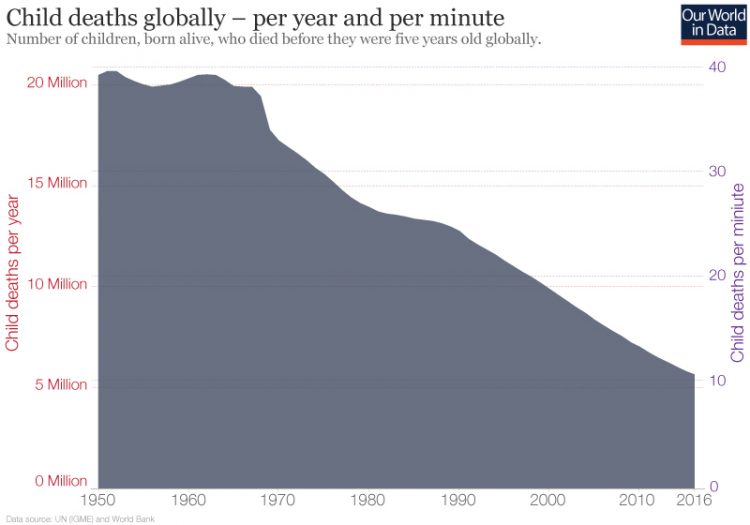 The availability of contraceptives allows parents to have only as many children as they want. And that number changes as people’s income goes up. From decades of demographic research, we know that women decide to have fewer children as they get access to better education and better opportunities in the job market. We also know that when child mortality falls, so that families do not need to fear that their children will die, they consequently decide to have fewer children in the first place.

Improvements in conditions for women and the health of children have driven a rapid reduction in fertility rates across the world. In fact, the global fertility rate has halved in the last 50 years, from more than 5 children per woman to fewer than 2.5 children. The world population growth rate has also halved in the last 50 years and is just above 1 percent 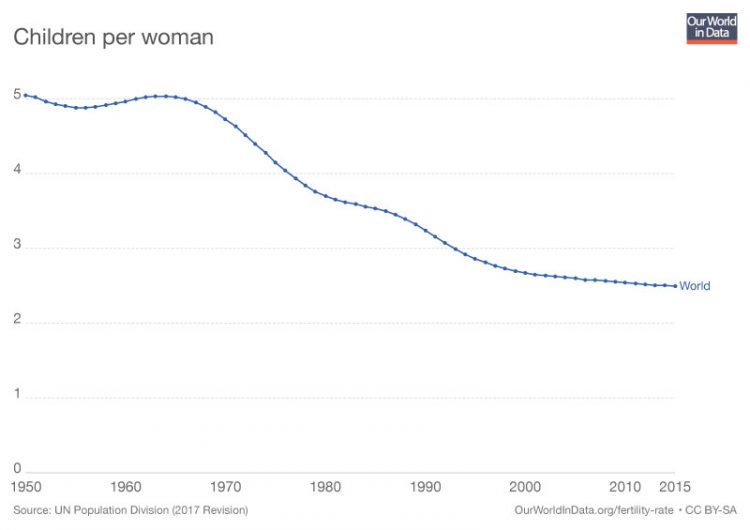 Living in poverty means that many of the most essential things in life are out of reach. People in poverty tend to lack decent shelter and basic healthcare, and they often struggle to afford adequate food supplies

People are considered to live in ‘extreme poverty’ if they have to get by on less than 1.90 international-dollars per day, which is a currency that corrects for price differences between countries and inflation.

In this definition of poverty, the term extreme poverty is clearly appropriate: this is a very low poverty line.

In 1990, 1.86 billion people were living on less than 1.90 international-$ per day—more than every third person in the world.

Twenty-five years later, the number of people living in extreme poverty has more than halved to 706 million, every tenth person. 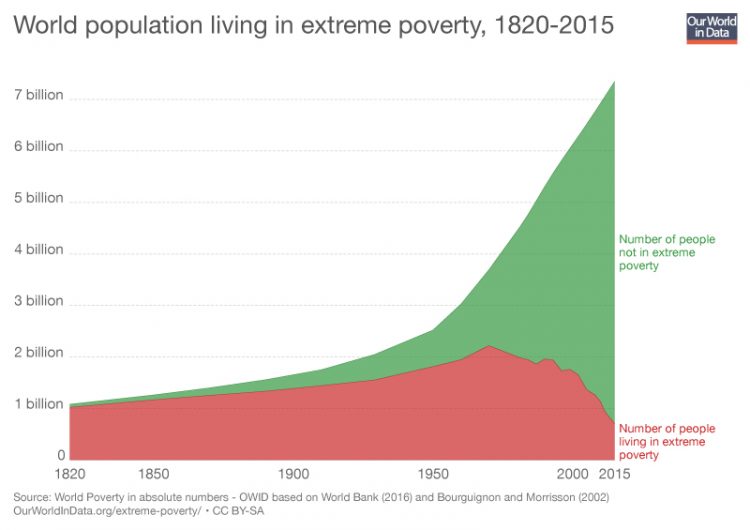 Remembering these facts about the world brings to mind why I think it is important to get engaged in global development. The statistics on the current state of the world make clear that we cannot be complacent about the world as it is today. Especially because progress is uneven, and in sub-Saharan Africa progress has been slower, but is not absent. The statistics on global change over time tell us that it is possible to work for a better world. The number of child deaths is dropping. The challenges of rapid population growth will not continue indefinitely. And the number of people in extreme poverty is falling. (source: gatesnotes.com)

Let’s continue in this direction. Our past successes should encourage us to work for more progress.

BECOME AN INSIDER – THE BLOG OF BILL GATES – GATES NOTES

With the great team of Kurz Gesagt Dr. Max  collaborated to make a short video that explains how rapid population happened – and why it will come to an end

And in another video we told the history of the decline of maternal mortality: