‘The Family Business: Trump And Taxes’

This brilliant 25min short investigate film, exclusively released globally on october 7th,  follows a team of New York Times investigative reporters through their diligent and intense efforts in uncovering the information that led to their exclusive report on Trump family finances.

This follow-up to ‘The Fourth Estate’ chronicles the efforts of a team of New York Times journalists to uncover the information that led to their blockbuster reporting on Trump family finances.

The film is now available for online sampling on YouTube, Facebook and SHO.com. It also is rolling out across multiple television and streaming providers’ devices, websites, applications and authenticated online services and their free On Demand channels.

The Family Business: Trump And Taxes Premiered Sunday October 7th at 8:30pm ET/PT only on SHOWTIME.

The film was directed by Jenny Carchman and produced by Oscar nominees Liz Garbus and Justin Wilkes (The Fourth Estate) who were embedded for more than a year inside The New York Times. It follows Times investigative reporters David Barstow, Russell Buettner and Susanne Craig as they expose the untold story of how Donald Trump became rich. Mr. Trump has proclaimed himself to be a self-made billionaire but what these reporters found offers a very different account, based on tens of thousands of pages of financial documents they obtained, including more than 200 Trump family tax returns.

Three reporters spent over a year digging through more than 100,000 pages of documents and chasing down key sources familiar with President Trump’s father and his empire. 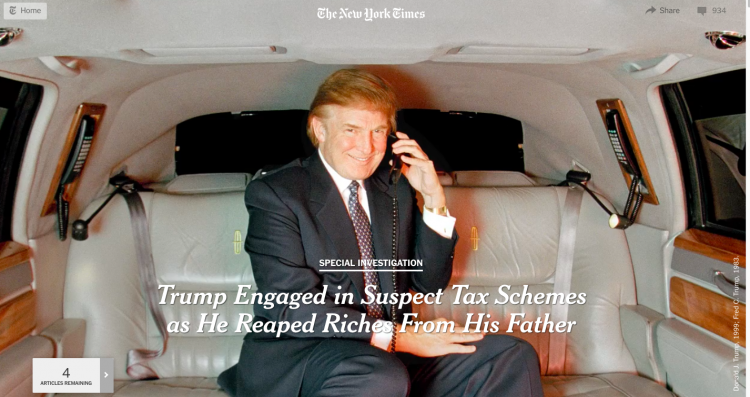 SPECIAL INVESTIGATION: Trump Engaged in Suspect Tax Schemes as He Reaped Riches From His Father

The Family Business: Trump and Taxes is produced for Showtime by RadicalMedia with Moxie Firecracker Films, with Garbus, Carchman and Justin Wilkes serving as producers. Dave Sirulnick and Jon Kamen are executive producers.